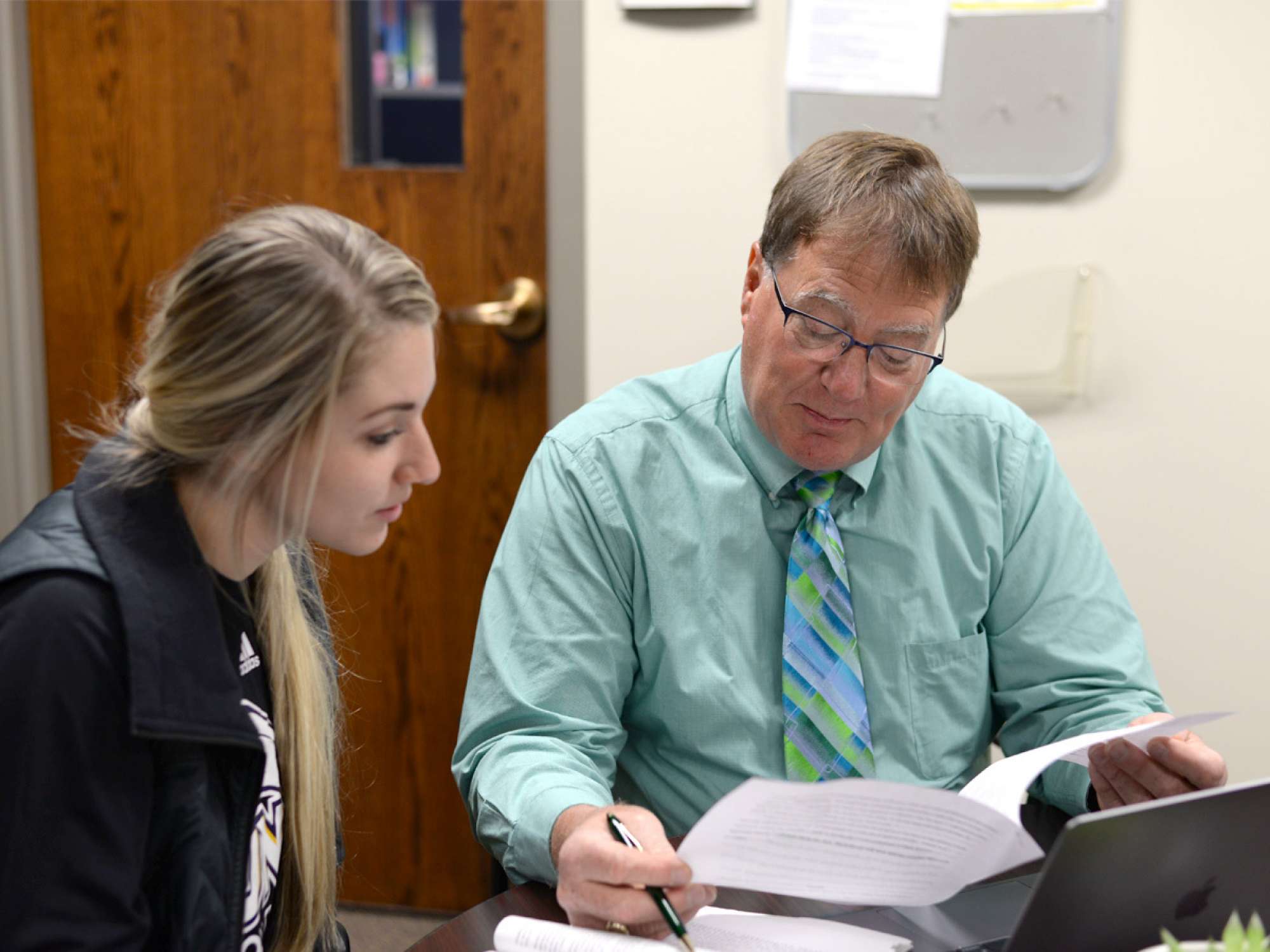 Philip Vierling, MBA, came home from work one night in 1998, put his hand on the outdoor grill and was blasted violently back by the massive force of a propane explosion.

His survival, which he calls God’s providence, became a point of gratitude and an object lesson for his future business students. “Life is full of unforeseen circumstances—be ready."

Tackling the Business of Business

Today, in addition to serving as the CEO of Plumb Line Vision and Liver Cell Technologies, Vierling is an assistant professor and assistant dean of UNW’s School of Business. In this position, he has had an opportunity to shape young business students looking for unique insight into the corporate landscape from a Christian worldview.

Vierling says his work at Northwestern focuses on students’ business practices, but also incorporates broadly transferable skills and healthy relationships. This is apparent in the development of new programs, such as the data analytics major.

One of the areas of life Vierling believes is important to share with his students is the issue of money. He teaches personal money management to all of his undergraduate students.

"For many students, it’s the first time they’ve thought about building a personal budget and plan," he says. "We help them think about what that first job will be, expenses, rent, and even insurance."

College students often think they are invincible and wonder why they need insurance, he says. He points out that they already have an iPhone, iPad and other material possessions and tries to convey to them that insurance helps protect them from the unexpected.

Again, Vierling draws on his own experiences to make an impression, telling students about his seven-year-old grandson who was born four months premature.

"My grandson is alive because of insurance" he said, sharing about the baby’s long stay in the neonatal intensive care unit, tracheotomy surgery, lung issues, and follow-up care.

Business Through a Biblical Lens

He challenges students to learn about money from Jesus who spoke plainly and boldly on the topic. He invites them to ask the hard question: "How much (money) is enough?"

Financial responsibility is a focus.

"I tell business students, 'You’re going to make more money than some of your classmates. Find a ministry that you are passionate about. Invest your time, skills, and money. Be generous and spontaneous."

He encourages students to act in emergencies—for example when someone needs a new car or help with schooling. Spontaneity springs from preparation and open-hearted generosity, he says.

His students, he says, can practice the life-changing habits of having gratitude for simple things and becoming friends with people of different income levels.

“There’s a danger in having friends only in your social class,’’ he tells his students.

The Value of a Mentor

Many of Vierling’s views on financial wellness and wisdom come from his business mentor.

They are specific suggestions and rules of thumb that invite a healthy attitude toward money into students’ lives. He encourages them to start now. Life assures everyone unforeseen circumstances. Vierling’s theology of financial well-being stresses preparedness and Christ-like generosity.

In the many leadership roles Vierling has held, he says he has been a “constructive contrarian," who challenges the status quo in a way that inspires creativity and success. A willingness to upset the apple cart, ask tough questions and employ what Vierling refers to as “strategic conflict" can drive better decision making.

Research by Stanford Business School backs up this leadership style with findings showing that teams with at least one person who is "willing to play devil’s advocate" can help improve creativity, decisions, and outcomes.

Challenging the status quo is risky and requires action that may be seen as brash. As CEO of a medical device company, Vierling made a bold move when he found that sales were behind at year-end so that senior management would receive bonuses but other employees would not.

In a surprising move, he spent the entire managers’ bonus to buy more inventory, so that the company could potentially sell more and secure bonuses for everyone. He communicated his move in a dramatic fashion. Dressed in full pirate costume, he crashed the regional training meeting and informed the vice presidents and product managers that he’d “spent all the gold and burned the ships.”

Suddenly, the officers weren’t worried about only their own bonuses, and they realized they all had to pull together. By rallying the whole company, they exceeded their target and sold beyond what they had thought was possible, earning bonuses for everyone.

Vierling’s tenacity has empowered him to persevere in the face of daunting odds. His latest challenge is to discover a viable, cost-effective solution to liver disease, which kills more than 40,000 people a year. Only 6,000 receive liver transplants annually, costing more than $500,000 per patient. He is working with doctors from Mayo Clinic to launch a new business, Liver Cell Technologies, to create a bio-artificial liver from pig stem cells. Other companies have attempted this in the past and failed after substantial investments of time and dollars, but Vierling is excited by the opportunity to push the envelope and save lives.

As followers of Christ, we value unity and often avoid conflict at all costs. However, if we avoid conflict altogether, we can miss valuable opportunities or allow poor decisions to go unchecked, says Vierling.

As a long-time board member with Josiah Venture, a missions group that trains young leaders across Central and Eastern Europe, Vierling works to integrate business practices into ministry models. It is challenging to persuade some that those two approaches can complement each other.

In one example, he pushed to get more dollars to test the viability and sustainability of a prospective new ministry. Though the group was hesitant to forgo other ministries, the insights gained led to a stronger launch for the new program.

At a Christian university, students can pay closer attention to how their faith influences decision making, integrity, and communication. Vierling believes this next generation of business leaders must seamlessly integrate their faith into business practice and demonstrate it in the way they approach challenges and conduct themselves. This philosophy is a break from convention but ultimately leads to work that is successful and meaningful for the Kingdom.

Learn to navigate today's business climate with unwavering integrity and skill. At Northwestern, you will be... To the Right of Legal