Faith Under Fire: The Story of Richard Weekley 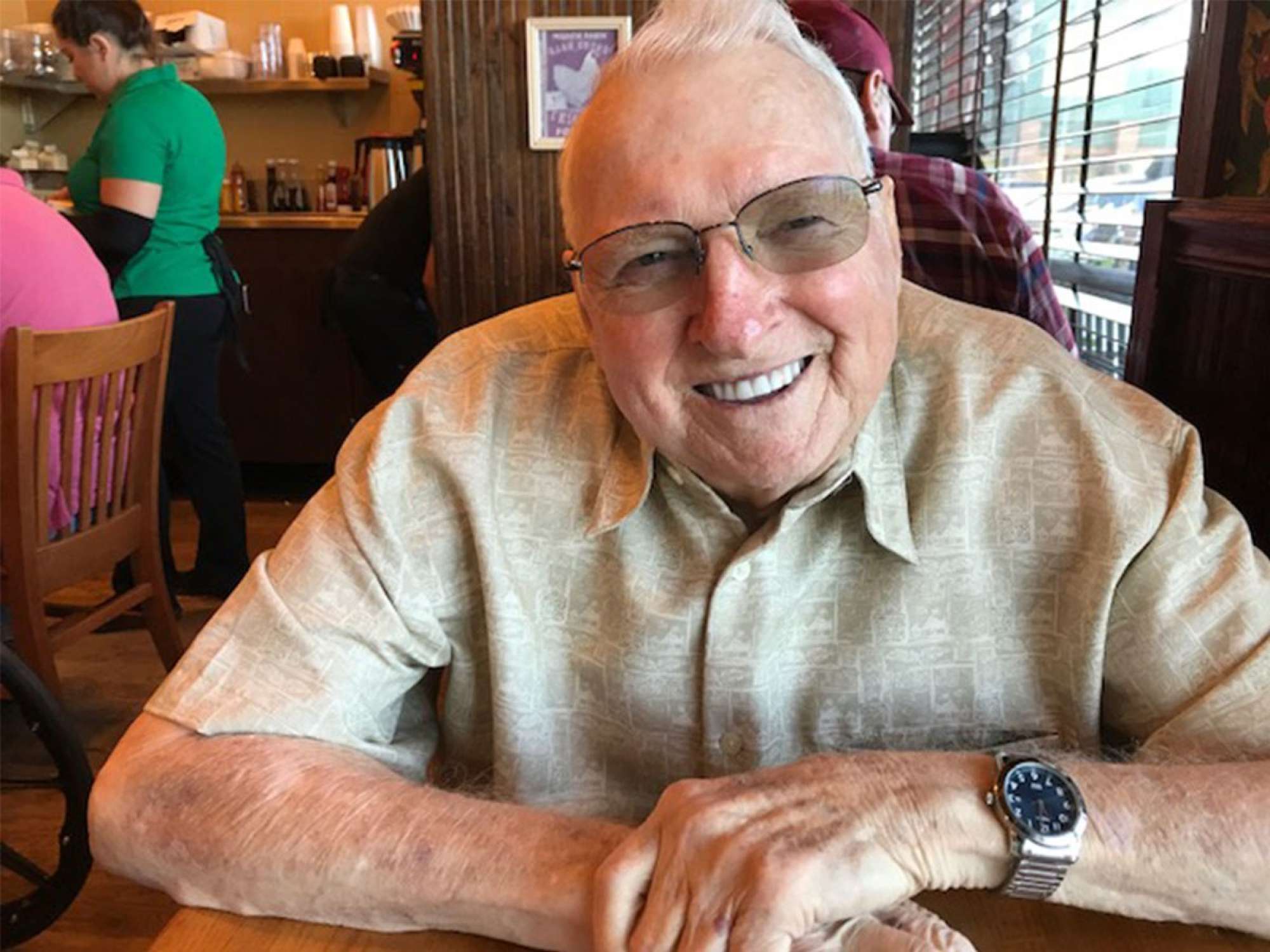 Like most children, many of Richard Weekley’s early memories were of his mother. Yet, these memories will seem foreign to many who have not encountered a situation like that of Dick Weekley. He remembers his mother as worn and weary from work about the house, washing his clothes with chapped and bleeding hands, and all the while, she was singing a gospel song. Soon, this steadfast, enduring, and heartfelt faith would come to define Richard (Dick) Weekley.

Born the son of itinerant, non-denominational Midwestern evangelists, the Bible was always a major factor in Dick’s life. From his youth, the family moved from town to town putting on Sunday school and musical performances for churches across Wisconsin and Minnesota. Times were tough as the Great Depression lagged on and many were unable to find work, housing, or even put food on the table.

Amidst such a struggle, one can imagine a young Dick Weekley carefully, curiously, and confusingly observing his mother work with the wash until her hands bled. He saw in his mother a steady, calm, and true faith in Jesus as her Savior, and he too desired such peace. At age nine, Dick prayed with his mother at his side to receive Jesus Christ as his Lord and Savior. She imparted to him the knowledge of the Gospel: one is saved solely by faith in Christ, not by works.

Dick’s conversion proved transformative in how he would handle life and his purpose therein. Nearly a decade later, the Second World War began, and America was once again consumed with bloodshed on a global scale. One may now look back with history as hindsight and understand that the Allies did in fact emerge victorious and that the United States did go on to become further established as a major superpower. Yet, at the time, all was in a state of flux, and this was no doubt a source of great anxiety for many.

Not all approved of the war, either. Dick’s father was a strong opponent and a staunch critic of FDR, who he largely blamed for the conflict. Despite this, at the age of seventeen, Dick requested that his father sign for him to enlist in the Army. Much to his surprise, his father agreed, with one imperative condition: Dick must use the military as an opportunity for ministry. This worked well for Dick, for that had been his plan the whole time. His first test was maintaining his integrity and ethics amidst a military culture that was less than supportive of these Christian values. Dick’s integrity quickly earned him the nicknames of “virgin” and “preacher.” But, he kept strong.

While moral conflict with his comrades was certainly a challenge, it was nothing compared to what the actual war had in store. Dick was assigned to an Army demolitions unit tasked with demolishing German bridges, important buildings, etc. Such a job only compounded the danger faced by the average American GI. Dick had to evade the enemy seeking to kill him as well as ensure that he did not cross the wrong wires and destroy himself and his unit.

Dick is thankful that he was never forced to take the life of an enemy solider, nevertheless, he was still confronted with many of the horrors of war. After Nazi Germany surrendered in May of 1945, Dick and his unit were assigned to guard captured Nazi SS troops. These were soldiers who were part of Adolf Hitler’s equivalent of the Special Forces. Historically, they are attributed with innumerable atrocities and war crimes, including the operation of Hitler’s concentration camps.

Dick recalls them as menacing figures. Tall and strong, they attempted to intimidate and agitate their captors with the intent of breaking free or bringing harm to an American soldier. In one instance, one prisoner was particularly acting out. He was loudly repeating a harrowing phrase: “American blood, das es primo.” Dick told him to be quiet, but he persisted. After a few moments, the SS captive raised his wrist and displayed a watch issued to American soldiers. He bragged of massacring a convoy of American troops and taking the watch as a prize. Dick’s instruction to the prisoner was simple: take another step toward me and I’ll shoot. The prisoner backed down. Dick then reported the situation to his commanding officer, who removed the SS soldier from Dick’s charge. Through such brutality, Dick Weekley did not lose faith. If anything, it served as a powerful reminder of the reality of evil within our world.

Several months later, Dick again viewed such evil. However, this time he was simply a spectator. Dick’s unit was stationed in Nuremberg, Germany, the location of the famous war trials. In his spare time, Dick was able to watch the scene from the balcony. He recalled Herman Goring (the former head of the Nazi air force and a chief advisor to Hitler) as being particularly ill-behaved and exploding into numerous tirades against the tribunal. Goring did not help his own case with such behavior. The penalty for his crimes was great, and he eventually committed suicide before facing such a reality. While a mere onlooker in this instance, Dick was again reminded of the value of defeating such evil and serving his country.

After the war, Dick returned to the United States. After a few weeks of contemplating the direction of his life, he enrolled at Northwestern College in the fall of 1946 and graduated in 1950. Dick remembers being drawn to Northwestern for its ministry and biblical studies programs. After college, he went to work in a banking firm where he met his wife, Lillian Peterson. The two had four children: Sharon, Daniel, Carol, and Colleen.

Dick later went to work for Honeywell and eventually became an accomplished book salesman for Augsburg Publishing. In 2002, Lillian went to be with the Lord. Today, Dick is as devoted to Christ as ever. He remains zealous for opportunities to share the gospel and continually emphasizes the need for a personal relationship with Jesus. Dick still generously supports Northwestern and greatly enjoys attending many events on campus.

To the modern reader, Dick Weekley’s story might appear somewhat perplexing. While impressive, it is difficult to imagine such circumstances, for most have not lived through the Great Depression or witnessed the horrors of a world war. But, perhaps this is the lesson. While many will never be able to empathize with the realities Mr. Weekley experienced, his integrity, courage, and devotion to his faith are timeless character attributes to be embraced and pursued by all. Someday, it is very likely our faith, values, or way of life will come under fire – may we have the courage to act with integrity and courage like that of Dick Weekley. ​Determined, driven and prepared for success, one student incorporates family and personal goals to add... Teaching for the Journey: An Interview with...

You will find Northwestern alumni in many different places and professions. We recently had the opportunity... Cultivating Community in the Classroom: An...

Northwestern Alumna, Emily Herlinger, shares her experiences teaching English as a second language both in... Anna Rask ’12 is an alumna and an adjunct professor of biblical studies at University of Northwestern. Here’s...