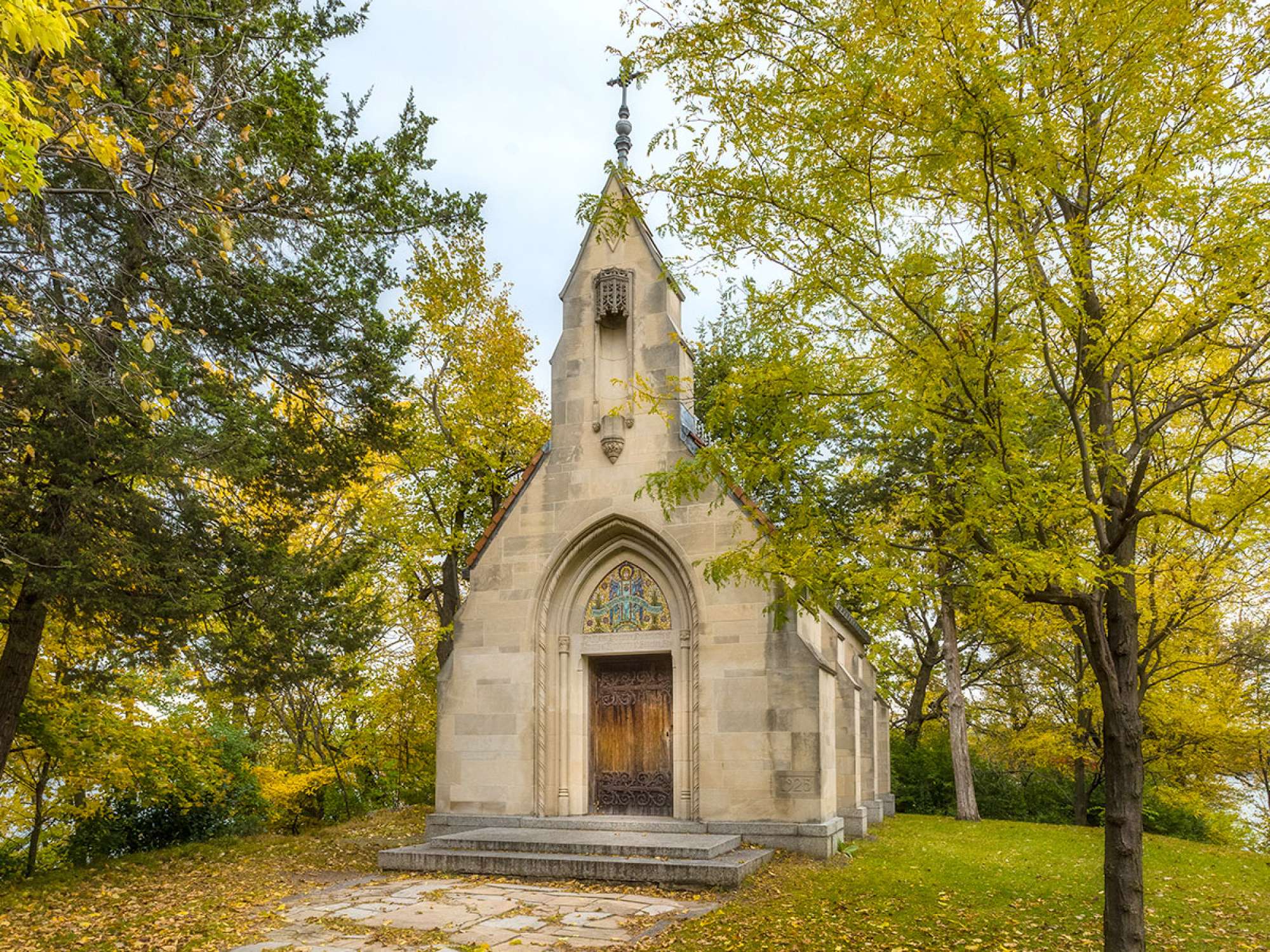 The construction of the Island Chapel was supported by heiress Wilhelmine Coolbaugh. In fact, the benefactress was the driving force behind the chapel's creation. Coolbaugh began corresponding with Archbishop Austin Dowling when the construction of the Annunciation Chapel and Nazareth Hall was underway. She envisioned the creation of another smaller shrine chapel on the island and set up a fund to pay for the costs.

The first landscape plan published by Morell and Nichols in June 1923 shows a small square pavilion at the center of the island. Architects Maginnis and Walsh developed plans in early 1925. Maginnis characterized the building as a "little Gothic scheme" with a "naive quality in architecture of this scale." Coolbaugh approved of the design, requesting also to be buried beneath the chapel. Archbishop Dowling approved of her wish and Maginnis and Walsh also designed the tomb, which was placed into the center of the marble floor.

The construction contract was awarded to Foley Brothers. The building specifications called for a concrete foundation; a granite base from the foundation to the top of the water table; double walls of limestone, each wall six inches thick with two inches of air space between the walls; and shingle roof tiles over wood framing. The roof cresting and cross are formed of a composite material called Hoyt Hardlead.

A rectangular building with side buttresses flanking and pointed-arch window openings, the chapel is surmounted by a steep gabled roof. The window openings are covered by intricate wrought-iron grilles. The entrance at the west end is set in a compound pointed arch opening and surmounted by a gabled tower. A cornerstone carved with the date "1925" sits to the right of the doorway.

The lintel above the doorway is carved with the Latin inscription EGO MATER PULEBRAE DELECTIONIS ET TIMORIS ET AGNITIONIS ET SANCTAE SPEI ("I am the mother of beautiful delight and of reverence and of knowledge and of holy hope"). The wall at the east end is unadorned except for the rose window.

The interior is a single space with the altar at the east end below the rose window. The interior walls are limestone, the floor is marble, and the ceiling has carved wood beams and trusses. The contract called for the limestone on the walls to be "Consolidated Old Gothic" Indiana limestone laid in a random pattern. The base and border of the floor and the altar step are pink Tennessee marble. The Drake Marble and Tile Company of Saint Paul supplied the marble for the floor and the altar.

Charles J. Connick provided the six original stained-glass windows along the side walls and the rose window. He also executed a mosaic medallion inset for the altar and a mosaic panel to be placed in the exterior tympanum above the entrance door. The side windows incorporated figures of archangels with appropriate symbols.

The tympanum mosaic depicts the archangel Gabriel and bears the Latin inscription REGINA ANGELORUM ORA PRO NOBIS ("Queen of the angels, pray for us"). A painted triptych, set in a carved wood frame above the altar, was created by Frank H. Schwarz, a New York artist. It was titled The Adoration of the Peasants.

A statue of the Madonna and Child was carved in Saint Paul by John B. Garatti, a local expert stone carver, and placed in a niche in the tower above the entrance.

The chapel was completed during the summer of 1926 at a total cost of about $35,000. The carved Latin inscription on the inside wall above the door acknowledges Coolbaugh's donation. The inscription is translated as "Wilhelmine Frances Coolbaugh, A Devoted Daughter, Cared Enough to Erect This Shrine of the Most Sweet Mother of God."

After the sale of Nazareth Hall to University of Northwestern in 1970, the triptych, the stained-glass windows, and the tower statue of the Madonna and Child were removed. Coolbaugh's remains, originally buried beneath the chapel in 1933, were also removed for re-interment to Mendota Heights, Minn. The Island Chapel is now closed and used for storage of building artifacts from Nazareth Hall.

College is an investment, and we invite you to come visit to see what our students love Northwestern! You can...