Designing the Dream of Nazareth Hall 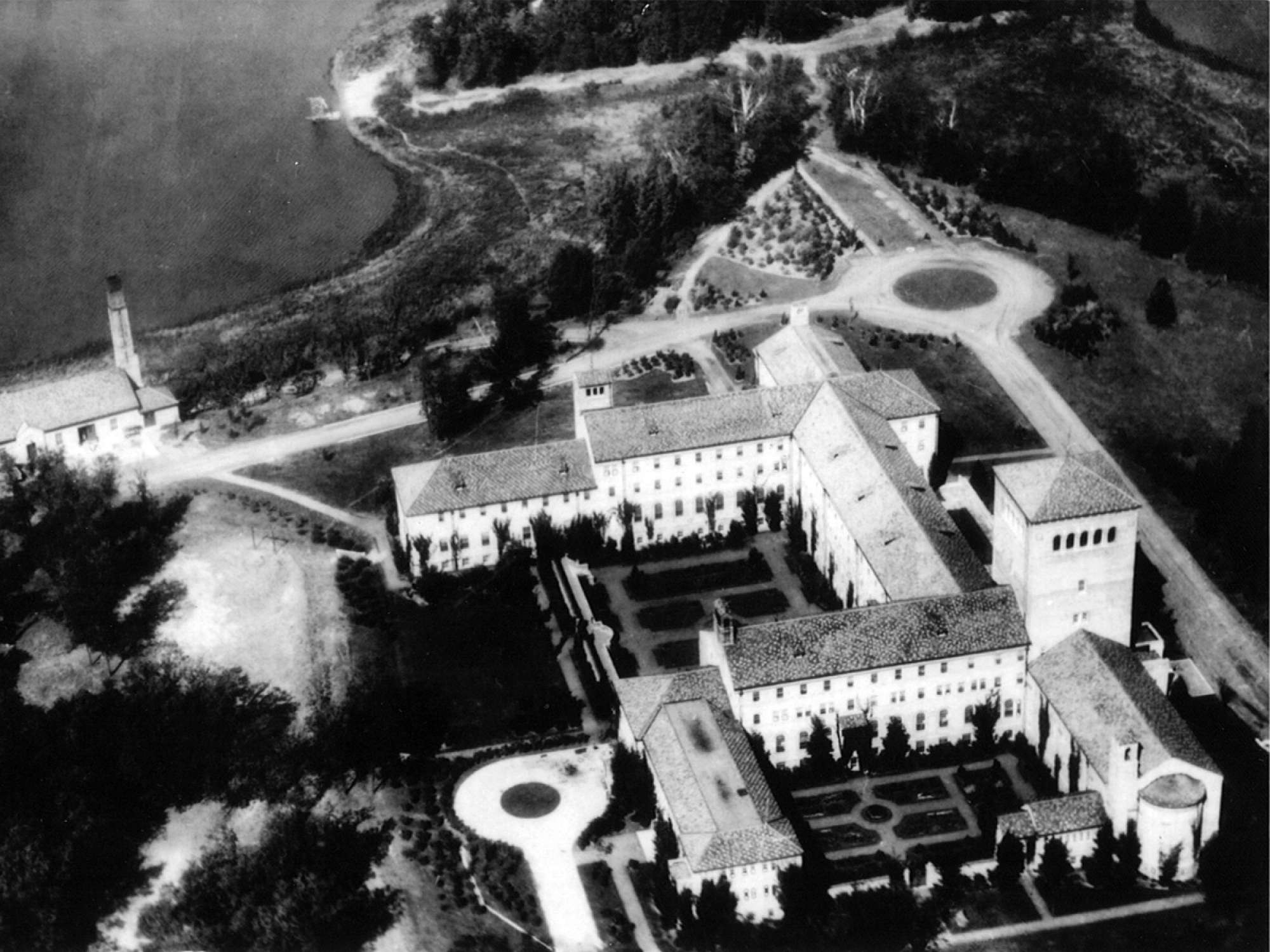 Nine Northwestern students and I gathered an hour before a January dawn, an unusual time to convene any class at any college. Our purpose: to arrive in Nazareth Hall Chapel while it was still pitch black and quietly await the sunrise.

As the sun rose, it gently illuminated the stained glass windows and the soft pastels turned to brilliant proclamations of scriptural statements in visual form. As we were witnessing what makes this building so unique, we wondered…

How did Nazareth Hall come into being? Who built it, and what were the intended messages contained in architectural layout, decorative ceilings and beautiful windows? What is its value to us at University of Northwestern in this millennium?

These were the questions asked by students in my Sacred Architecture class. And they are questions with answers.

The Beginning of a Dream

The Lake Johanna dream began in 1866, when, in his wisdom, Bishop Thomas L. Grace purchased the first 42 acres at $19 per acre with the intention of creating a seminary to prepare priests to minister "in this rugged land." Little did Grace know that it would take 57 years for his dream to be realized.

In 1915, Archbishop John Ireland added 47 more acres of property to the parcel on Lake Johanna for $75 per acre. But it was finally Archbishop Austin Dowling who received Vatican approval in 1921 for the construction of a minor seminary "out in the country" of Rose Township, now Roseville.

The Best of the Best

Upon receiving Vatican approval, Dowling contracted the leading ecclesiastical architects of the day, Charles Maginnis and Timothy Walsh, who were from Boston. They were also responsible for designing the largest basilica in the country (in Washington, D.C.) and many buildings on the University of Notre Dame campus.

The architects would know this project as Job #518, Lake Johanna, Minnesota. The four-story structure would have accommodations for 250, including faculty, 12 nuns, and approximately 200 students from ages 14 to 21.

Great architects like Maginnis and Walsh hire great ceiling makers. And in the Nazareth Hall project, that ceiling maker was Raphael Guastavino. The striking beauty of the herringbone pattern in the acoustical clay tiled ceiling is simply amazing.

The Raphael Guastavino Company used secret formulas for the techniques and patented materials that fireproof as well as beautify the vaulted ceilings in the foyer and chapel. Guastavino vaulting was used in the finest buildings during the late 19th and early 20th centuries. Delicate patterns in the chapel ceiling incorporate images of flowers, crosses, and Chi-Rho symbols from Christian heritage.

Dowling also contacted the greatest American stained glass makers, the Charles J. Connick Stained Glass Company, in 1921 to invite the artist himself to create a series of windows to enhance the architecture.

There are 18 windows in the Annunciation Chapel, 24 in the basement crypt area of Nazareth Hall, and nine in the nun's chapel. There were also six angels and a rose window in the Island Chapel. All of the windows were completed between 1923 and 1925, making them artistically and symbolically coherent.

Dowling wrote to Connick stating he had chosen him because "the beauty of the chapel requires the finest stained glass windows."

It doesn't take long when you are viewing the windows of Nazareth Hall to determine that the artist and patron succeeded.

Made from the finest materials, Nazareth Hall was built in the Northern Italian style described as Lombard Romanesque. It is a quiet style, carefully laid out in patterned red bricks—600,000 total.

The tower is the main focus, designed to reach toward heaven and remain visible above the treetops from across the lake.

Interestingly, Nazareth Hall is positioned on the land oriented from southeast to northwest. This is a very uncommon layout, with a northeast-facing entrance. Historically, the entrance of a church is on the west side and the building is aligned so that the altar is on the east.

Finally, the 120,752-square-foot Nazareth Hall was completed, debt-free, dedicated, and opened for classes on September 12, 1923. In the 1950s, the student body started to outgrow the existing space and in 1962 the school built St. Austin's House, now known as Riley Hall, connecting it through an underground tunnel to Nazareth Hall.

Nazareth Hall educated young men from the fall of 1923 until the spring of 1970 when the Vatican decided to close the school and prepare seminarians for the clergy at St. John Vianney Seminary on the campus of the College of St. Thomas, now the University of St. Thomas.

On June 5, 1970, Nazareth Hall published its final yearbook, entitled "Forty-Seven Years," as a tribute to the legacy of its "alumni and benefactors." The final words in that document can be read as a prayer of thanksgiving and as a prophecy: "...Those who love Nazareth Hall are grateful for the past. As for the future, Nazareth Hall lies open, waiting for renewed vision. —Perhaps a totally new dream that will make the most of its beauty, and continue the best of its traditions—being of service to man...."

The Nazareth Hall dream indeed did not die. Little did the author of that tribute know that God's plan was in motion and that University of Northwestern, an institution whose mission had been "on hold" for three years, was to be the destined recipient of the property that had so richly blessed the Catholics of St. Paul and Minneapolis.

The denomination has now changed but the mission is similar: to develop individuals to serve the Lord. University of Northwestern will continue to be in the business of fulfilling that dream.

Dr. Mark Baden (Art) has taught at Northwestern for more than 25 years and also serves on the Preservation of Campus Heritage Committee. He earned an M.A. and Ph.D. from the University of Minnesota. Having grown up in Roseville, he always had an interest in the Nazareth Hall tower across Lake Johanna.

Baden registered for his first course in ceramics at Hamline University in 1972 and determined that the medium of clay was his best fit in the art world. Later... Learn how we began in Minneapolis in 1902 as Northwestern Bible and Missionary Training School, with just...