Learning to Love Through the… | University of Northwestern, St. Paul

Learning to Love Through the Mess of Adoption 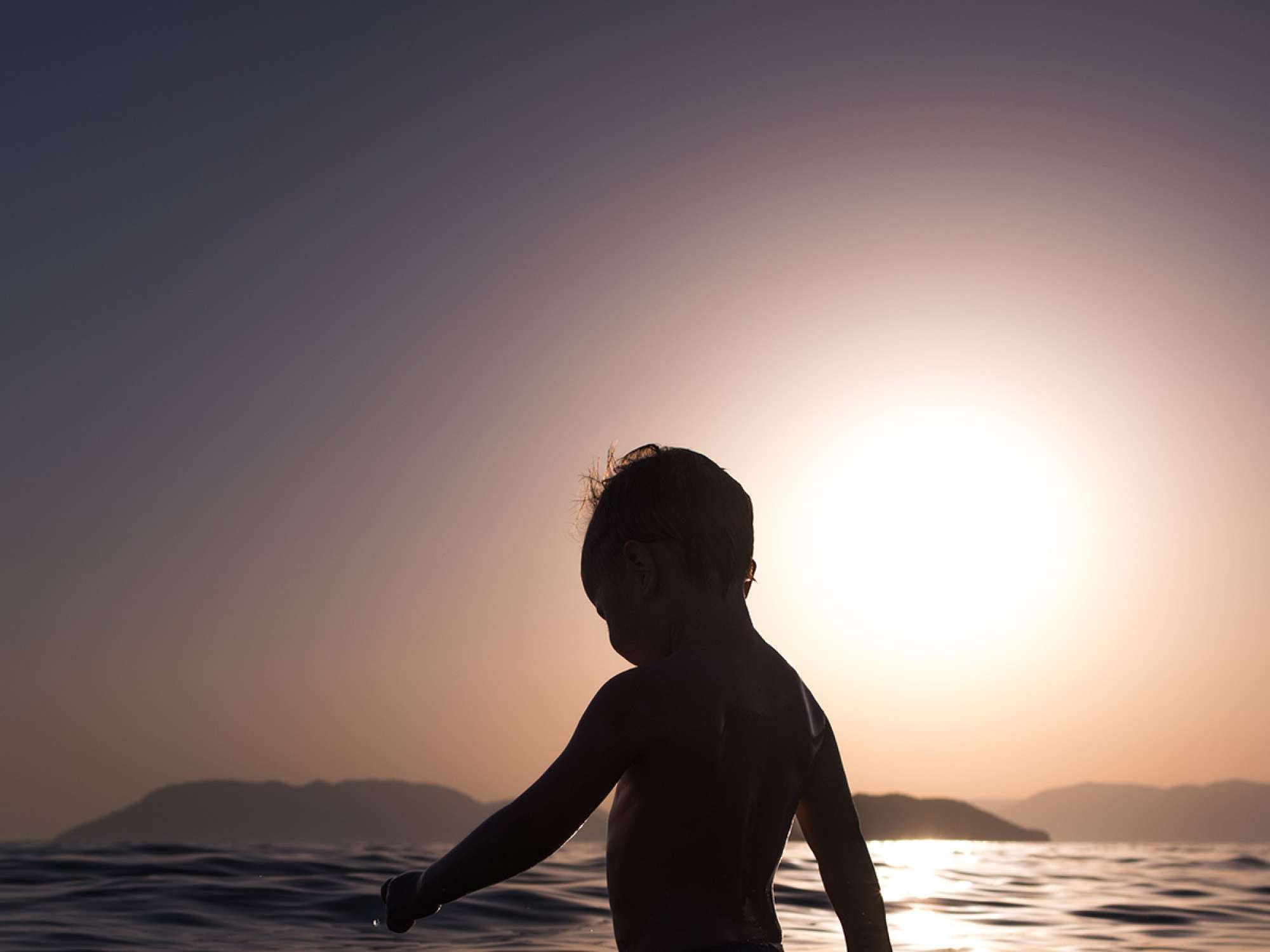 If you listen to Erin (Black) Sibley '04 for thirty seconds, you'll know she's a mom. It's her quick, witty candor peppered with bits of kid English, e.g. "icky"—and the fact she can laugh at a $300 plumber bill due to toys flushed down the toilet. With four boys under seven she has plenty to tell—and never without remembering how Jesus cleared the land of the life she dreamed of to plow and plant for the life she enjoys now.

Erin met Ted Sibley '04 on a carpooling expedition to get groceries freshman year at Northwestern. Ted needed milk, and his friend told him a few girls were headed to the store. The sight of bright-eyed Erin faded milk from his consciousness, and not long after they were looking ahead with "together" in mind.

One day Ted took a deep breath for a long conversation with Erin about his five-year battle with cancer, starting at thirteen. She listened warmly, asking only one question at the end of his story: "Would your cancer history affect you having children?"

Based on everything he'd been told, Ted confidently told her, "No."

By 2003 they were getting married. Erin chides her younger self, remembering her "dreams were not a whole lot different" than most of the girls she knew:

"I was marrying a cute boy that loved God and I was gonna have me some babies and live in the burbs somewhere," Erin remembers, "And I was cool with that and I was lookin' forward to it."

They weren't getting pregnant, and Ted and Erin didn't know why. By 2006 they'd been married three years, and Erin had patiently waited to start their family while Ted made a two-year dent in medical school. They decided Ted should get tested—just precautionary, to clear out his childhood cancer as a possible hindrance.

Ted came home after his follow-up appointment and sat with her on the couch. He could barely speak, weeping as he showed her his urology results: "No Sperm Identified."

He had known for a week, unable to tell her until now.

Erin stared at the words. Three senseless, unbelievable words. She was fine—she could have her own children, but now she never would.

Adorable little ones were a constantly arriving joy for all her friends from college. Frustrated, she asked God, "Why don't I get to have what every single person I know just gets to have?"

Time passed in tears and anger, with further medical attempts at some miracle of fertility. In the midst of it Erin realized their future had come to a fork. Adoption was no longer a someday; it was their path to family.

"We went with international adoption at the beginning because I didn't want to share," Erin admits, "I didn't want to deal with birth moms; I just wanted to be the mom. I wanted the youngest thing, the closest thing and I wanted to be a mom and that was it. And I'm not proud of that now, but that's where I was at." Still grieving, 25-year-old Erin went to Colombia for a smooth, swift journey to bring home three-month-old Lucas. He became a Sibley, and Erin became a mother.

Lucas was easy to love. His trauma was limited to separation from his birth mother, who placed her son in a good orphanage with sights on improving his circumstances. Erin brimmed with "over the moon" maternal love, and the Sibley trio moved down to Kansas City for Ted's residency. They began a second adoption process, this time in Ethiopia. And along came Ben.

"Ben we will call the life crisis of 2011," says Erin, "Things went south with Ben's adoption."

By the time Ben came home, he was a traumatized toddler. Ben didn't cry at night, even if he was sick; he had learned that no one would come for him. During the day, Erin fended off his clawing and punching at her face. Ben unknowingly made a relentless plea for love, lashing out in pain and barely able sense his mother's affection, much less return it.

"So what does that love look like," Erin asked repeatedly as she cared for Ben through a year of tears, "How do you love the kid that can't love you? And how does that look like God's love for us?"

As she thought about latest leg of the journey with her Creator, Erin saw the persistence of his love. In the soulful screaming and pain of losing her dream to have children, he had held her firmly. And if Lucas had been her first taste of a new dream, Ben was a fire to finish off the old one.

"Did you notice children don't fulfill you? They really don't," says Erin, "I had it in my head that if I just had a few more normal healthy kids, that I would be happy in my life, because I had that as a major idol," Erin says.

We speak of idols in our lives when we realize a failure to experience the fulfillment of belonging to God because we have believed that achieving something else will serve us better, and act on that belief, investing our emotions and energies and coming up empty.

Erin watched the idol of her ideal family and motherhood break as she mothered the children God gave her. She realized the energy she'd been spending working religiously to achieve her picture of family life, trying to earn her children's affection, and reaching for a certain status of motherhood. Essentially God was telling her, "Okay Erin, now we're done with that. Now we know that your kids are never gonna fulfill you. So because your identity and your love come from me, you are now free to love things that are even harder to love."

"So then we threw normal healthy children out the window," she says.

Erin and Ted submitted a special needs dossier for another adoption through Lucas' orphanage in Colombia, and prepared to welcome Samuel into their family.

"I was in a completely different place spiritually, because when you don't need to protect or control your idol, you can be totally free to do what God needs you to do."

Unlike Ben, Sammy has never slept through the night—Erin goes to his room every night when she hears him cry, "Moooooom!" She says there is a little piece of him that is afraid she will not come, so she comes.

As Erin and Ted adjusted to life with their three boys, a fourth adoption opportunity came unexpectedly. While in Colombia to get Sammy, Erin had received word that she could submit a dossier for Ethiopia to adopt when Ethiopia's program opened up again, having been closed shortly after Ben's adoption. She had sent in the paperwork thinking she had years, but 10 days later, she found Trent. He had been on the waiting child list for a year—missing developmental markers, with medical complications and a traumatic history.

"I still remember to this day reading this kid’s medical rap sheet, knowing what I know about trauma and how that can manifest in behaviors and lifelong mental health trajectory," Erin says, "And I remember staring into the mirror and thinking, okay, now I’m about to blow up my life."

Ted and Erin fought Ethiopia a year and a half to get Trent home. In the meantime, Erin began working with Safe Families, an organization mobilizing long term hosting of homeless children at risk to enter the foster care system.

"So that year and a half we had eight children total living here and it was hard and brutal work, but it was fantastic work," Erin says, "And we still love it."

When Trent finally joined the Sibley clan, Erin and Ted began to unearth the short but troubled history of their new son. Trent was beaten and abused and starved, born in the worst of circumstances and the only survivor of his three siblings. Now five years old, he cannot speak due to brain damage from his traumatic birth.

As she cared for Trent, Erin remembered a prayer she had prayed, that God would help her get to the bottom of the bottom, to the greatest need. She had tattooed Proverbs 31:8 on her arm: "speak up for those who cannot speak up for themselves," thinking her and Ted would be overseas somewhere, someday.

But God brought her Trent—society had discarded him, his community had damaged him, and even adoptive parents had dismissed the disabled, unmanageable toddler with midnight skin who couldn’t speak.

"Someday my little boy is going to be able to talk to me in heaven and he’s going to be able to account for every person who invested in him, for everybody who looked at him as the heart of Jesus incarnate," says Erin, "He’s beautiful and he is perfect and he has his own story to tell and I get to tell it." Erin says she knows difficulty lies ahead, but she also knows she is not doing anything that Jesus didn’t do for her. Life with Ted, Lucas, Ben, Sammy and Trent has become a living picture of real Love.

"God gets down on his knees when you are covered in crap and dirt and blood and disease and he holds the baby at 2 a.m.," she says, "God does the mess with us." Wondering how your faith will grow at Northwestern? We commit to your spiritual formation and growth by...