Slinky the Snail by the Bartz… | University of Northwestern, St. Paul

Slinky the Snail by the Bartz Brothers 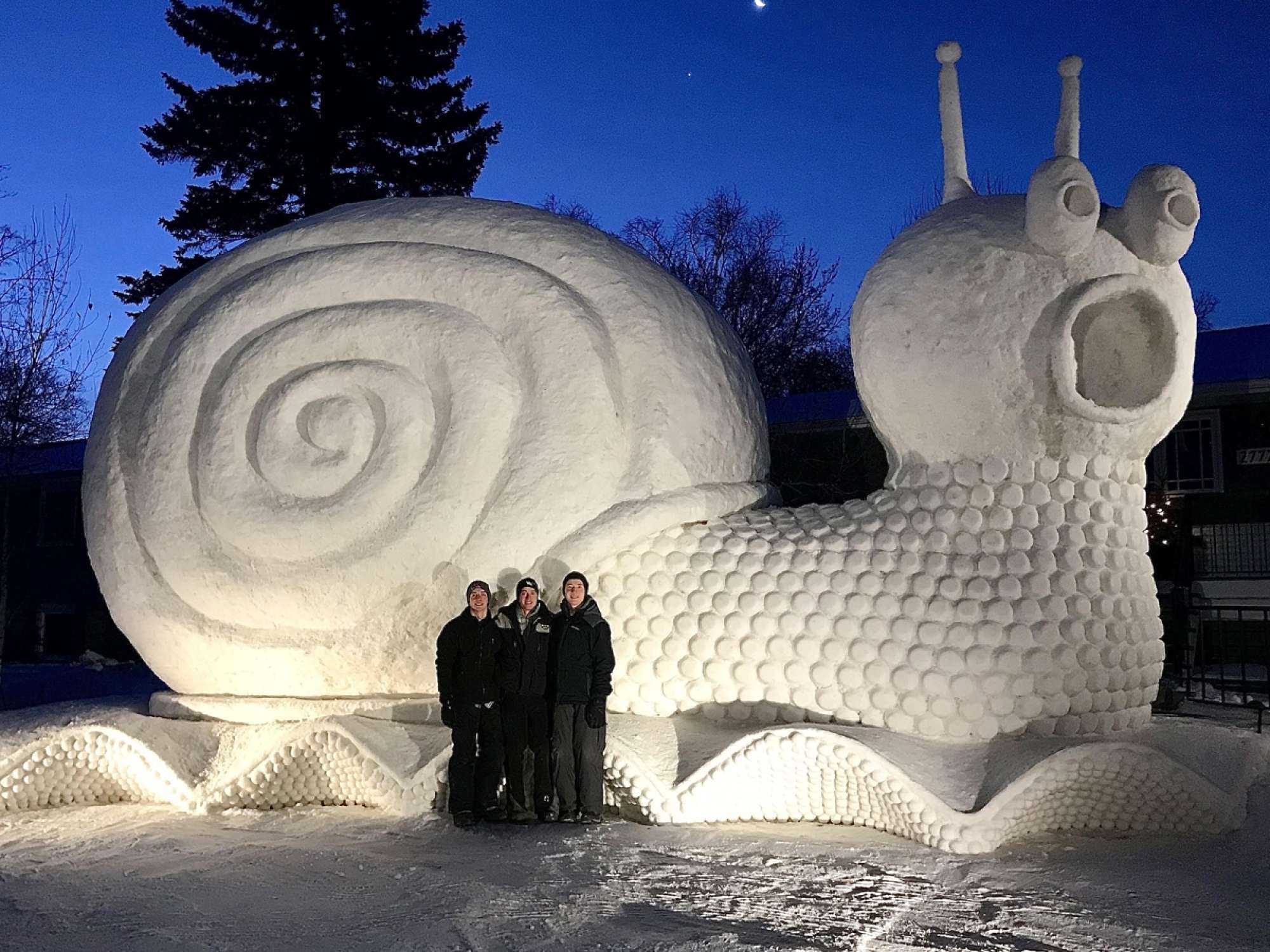 The Bartz brothers have just crafted their eighth annual snow creature. You may have heard of them from one of their 42,000 Facebook followers or even seen the giant snow sculptures featured on Ellen, NBC, the Pioneer Press and the Star Tribune. Working together, Austin, Trevor, and Connor Bartz along with some of their friends, unveiled Slinky the Snail on January 1. Slinky is 22 feet tall, and he took about 600 hours to complete.

Austin, a Northwestern alumnus (’17), is grateful for the time that he is able to spend with his brothers. “Building snow sculptures is a great way over Christmas break for us all to work together, to spend time together, and it helped us to all be together. Trevor was at school in Iowa, so it was a great way to catch up,” said Austin. The Bartz brothers began their career as sculptors in 2011 following a snowy day after their sunny Florida vacation.

Austin estimates about 5-6,000 people visit each day over the weekends, with a couple thousand more driving by, to see Slinky and that the visitors double each year. “The CEO of Hy-Vee called and wanted us to build a snow sculpture for the Kansas City Chiefs AFC Championship Game. Last year, the Minnesota Super Bowl Host Committee wanted us to build a sculpture in front of U.S. Bank Stadium,” said Austin. Unfortunately it wasn’t possible because of the amount of necessary manpower and their established system for building the sculptures.

Connor is a current student at Northwestern, while Austin studied business during his Northwestern career and graduated in 2017. Austin now owns and manages his own business, and he is grateful for the applicable classes he took at UNW to prepare him for his career. His business Bartz Lawn & Landscape does snow sculpting in the winter and landscaping in the warmer months, where he combined what he loves with what he studied in school.

A favorite memory Austin has from Northwestern was orientation week, “It was great getting to know a bunch of strangers, being in the same boat and becoming friends,” said Austin. “I learned more about life and about the Bible at Northwestern. I learned to rely a lot more on God. I wanted to learn more for myself even outside of the classes.”

Austin initially decided to begin donating money to One Day’s Wages after hearing its founder, Eugene Cho, speak in chapel. “The first four years of sculptures were simply for people’s enjoyment, but then we realized we can make a bigger difference. We wanted to do something for a Christian organization,” said Austin. “I remember Eugene mentioned in chapel that 100% of donations received went straight to providing people with clean water. We thought it was fitting to donate to providing people with clean water because our sculptures are made entirely out of water.” The Bartz brothers have raised over $87,000 since they began asking for donations four years ago.

The Bartz brothers are grateful for the creative way they have been able to make a difference, to bring people joy, and to spend time together. Who would have thought that a Florida vacation, a speaker in chapel, and a Minnesota snowfall would have created such a unique opportunity?