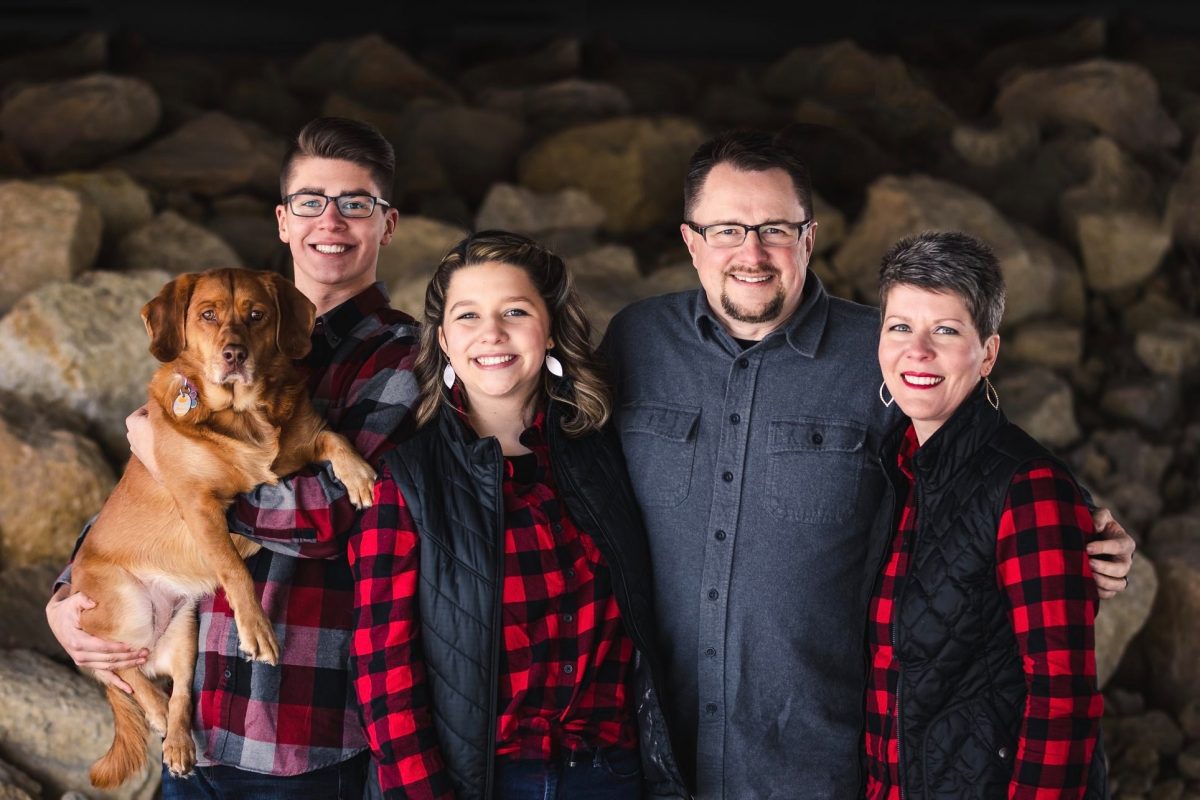 On Friday, March 13, University of Northwestern – St. Paul received the sad news that Dr. Jeremy Kolwinska, Associate Vice President for Academic Affairs and Dean of the College of Arts and Humanities, passed away unexpectedly of cardiac complications.

This is a profound loss for our community. As President Alan Cureton noted in his letter to the community, “Dr. Kolwinska was a man of deep faith, extraordinary talent, incredible interpersonal skills, and a gifted administrator. His leadership on our campus was extensive and strong. We will miss him. Heaven’s gain is our loss.”

The following tributes were written in honor of Dr. Kolwinska. The first was written by Dr. Janet Sommers, Senior Vice President for Academic Affairs, one of Dr. Kolwinska’s close colleagues. The second was written by Andy Gammons, Director of Traditional Admissions, Dr. Kolwinska’s colleague and long-time friend, as an address that was to be given at the funeral. As funeral services have been postponed due to the recent spread of COVID-19, we share these tributes with you here.

With deep sadness, I mourn with you the homegoing of our colleague and friend, Dr. Jeremy Kolwinska. As many in our community have testified, Jeremy was an exceptional individual, both professionally and personally. I remain grateful to God that I had the privilege of serving with him at UNW. Jeremy lived a life worthy of celebration. As Associate Vice President for Academic Affairs and Dean of the College of Arts and Humanities, Jeremy served as my right-hand administrator, ready and able to accomplish any task asked of him. But frequently, he didn’t need to be asked. He had the intuitive ability to identify and act on items that needed to be addressed even before I was aware of them. He made things better.

As a strong, faithful leader, Jeremy possessed a remarkable mix of qualities. While detail-oriented, logistical, and process driven, he was also caring, empathetic, and genuinely kind. People mattered to Jeremy. He mentored, championed, and worked collaboratively with others, making friends widely across our university.

Jeremy knew how to get things done but was never too busy to serve as our van driver, picture hanger, and meeting planner. He made us laugh when the work became heavy. He relished good music, fine tea, and comfortable shoes. He loved to read, collect fountain pens, and eat at Chick-fil-A. But mostly he loved his wife Joan and their two children, Owen and Erin, with an abiding, sacrificial, joyful kind of love.

Jeremy was true blue. His integrity and authenticity were rooted in a love for God that was deep, humble, yet resounding. He touched more lives than he ever imagined.

Jeremy is now with Jesus, so despite tears and questions and sadness, we can rejoice together in the steadfast hope of eternity. We shall see Jeremy again.

With sorrow yet rejoicing,
Janet

My name is Andy Gammons. I’m the Director of Traditional Admissions at University of Northwestern. I was a colleague of Jeremy’s, but before that and more than that, I was Jeremy’s friend. Know that I count this as one of the highest privileges in my life to tell you about my friend, Jeremy Kolwinska.

Amanda and I met Jeremy and Joan about 13 years ago when we both became members here at Bethlehem on the same day. We soon became friends. We both worked in higher education. We both enjoyed the outdoors. He was okay with my bad jokes. I caught his dry subtle humor. His family joined our small group and our families became even closer. There were many nights when the Kolwinskas and the Hipkins passed the evening in our home. Our kids are close. Erin has played lots of dolls and house with my girls. Owen is one of Caleb’s best friends.

It took a while to get to know Jeremy well. He was a bit of an enigma. I would often find out things about him and say, “Really?” He was a very accomplished musician, but he was a hunter and could fix anything that broke in his house. He finished his basement, with just a little help from Joan’s dad. He was a very serious introvert. But as you got to know him, he let you into his lighter funnier side. It wasn’t pie in the face humor, but quick subtle one liners that if you weren’t careful you might miss. For instance, Jeremy was quick to send venison recipes to our friend Dan after he hit a deer in Montana. Some of my favorite text messages from him were during our church’s quarterly strategy meetings. He loved to read. He read books from those concerning higher education to spy novels. He would recommend a book and then text #bookjail.

If there was one word that I could use to describe Jeremy, it would be faithful. If Jeremy said he was going to do something, it was going to happen. His faithfulness manifested itself in his earning a doctorate in musical arts in trombone.

He was a faithful employee. When I started at Northwestern, I would tell people that I knew Jeremy and the consistent response was, “Oh, we love Jeremy here.” They should have. If you wanted something done there, just ask Jeremy. He’d get it done.

He was a faithful leader. He tirelessly and excellently led the orchestra here at Bethlehem. I would often tell him how much that meant to me. He would humbly nod and make a self-deprecating comment. He enjoyed it though and he was fun to watch from my seat there on the right. He led his college colleagues well. He was always looking for ways to improve processes and make Northwestern better. He cared about his people. Last year when we were camping, he drove a 10-hour round trip to speak at the funeral of one of his faculty members.

He was a faithful member of our small group. The Kolwinskas were always there right on time. If they were not going to be, he would text and apologize. I would thank him for that, and he would brush it off and say that if they didn’t come, their kids wouldn’t let them hear the end of it. He was always grateful to be a part of our group. I have lots of texts thanking me for small group or for organizing our annual camping trip. He was a faithful friend. Jeremy and Joan reciprocated our interest and pursuit. Whenever we invited, they came, even if it was last minute. Many of my texts from him were ones checking on us and how we were doing. “How’s Amanda? How are you?” I get to work early and my window looks out on his parking spot. He would often stop by to say hello on his way in. He would never sit down. He just wanted to say hi. The first text from Jeremy I have on my phone was when he sent me the posting for my current position.

Most importantly, he was a faithful father and husband. We talked more about our kids than probably anything. He loved you, Owen and Erin, and was so proud of each of you. Owen was his hunting and wood working buddy. Erin was his baker and little girl. He loved that you were both in the orchestra. He enjoyed being with you. Every Friday he took one of the kids out for donuts. (If you want Twin Cities donut recommendations, ask Owen and Erin.)

Joan and Jeremy have been together since they were 13. They didn’t talk a lot about this, primarily because they didn’t want to recommend that to Owen and Erin, but it worked for them. They were two sides of the same coin. He was so confident in you, Joan. He trusted you to do your thing, allowing him to do his thing. They were partners, lovers, and best friends. Joan said last week that she prays that her kids will someday be able to find someone as good as she did. Jeremy would have said the same thing. As we walked with friends struggling in their marriages, more than once did Jeremy and I thank God for the gifts of our spouses. It wasn’t always easy of course. But, through God’s grace, he was always looking to be a better husband, a better father, a better friend, a better leader, a better employee.

Joan, Owen, and Erin, I was 19-years-old when I sat in a similar seat to yours today when my dad died unexpectedly, way too young. My dad wasn’t at my college graduation, my wedding, the birth of my kids. I wasn’t able to call him when I had a question or just to hear his voice. In the almost twenty-five years since, there has been one constant. The faithfulness of God. One amazing gift that God has given you, is that when you think of your heavenly Father, it should not be difficult to trust his faithfulness. You saw a small measure of that faithfulness lived out by Jeremy. Jeremy’s faithfulness was because of the power of God and for the glory of God. If you could trust him, how much more can you trust your heavenly Father? He will not leave you or forsake you. He is for you. Who could be against you. I count knowing Jeremy and experiencing his faithfulness as an amazing gift of my faithful Lord.